Do you need a commercial dive team?
Contact Us 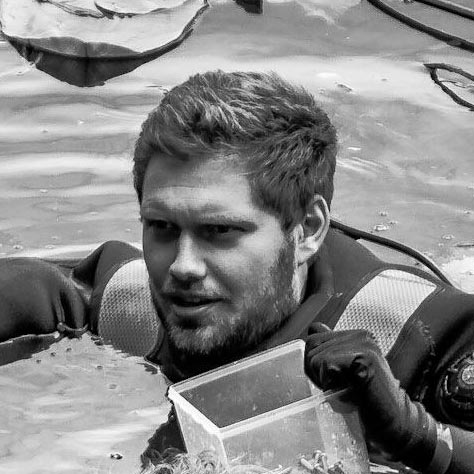 Qualified as a Commercial Diver

Ali qualified as a commercial diver out of Seadog Commercial Diving School in South Africa.

Ali worked on multiple projects including; river bed surveys on the Thames, a number of salvages including the tugboat Asterix and Portsmouth fishing boats, lock gate repairs, mooring buoy inspection and repairs, and pleasure yacht scrubbing.

Diving Manager and Operational Support. Lead diving role as well as maintenance of equipment within the company including diving apparatus as well as the boats and vehicles.

Ali ran the yacht scrubbing side of the company dealing with clients daily and responding to the 24 hour emergency diver call out service.

Ali decided to return to being a self-employed diver in November 2016. He has continued working with RS Divers as a diver with much the same work including Lock Gates, Salvages, Shipping Work.

He has spent time working as Crew and Master on 14m Multicats and Tugs out of Portsmouth Harbour, carrying out marine construction and maintenance.

This enabled him to acquire his Boat Master Licence in 2019. Since qualifying he has worked as ‘Master’ on the Hayling Ferry and various Multicats and tugs.

Ali also has experience in underwater burning, having spent a month removing metal from a 19th Century Borehole which was also confined space work. He has also worked down tunnels in North London for Thames Water.

Ali is also experienced in skippering multiple types of vessel around the Solent and surrounding areas, from 5-8m ribs to a 10m twin engine catamaran.

To discover more about our commercial diving services contact us today!
MAKE ENQUIRY

Operating in London and nationally across the UK, Kew Diving Services can assist with a range of specialist commercial diving requirements. Contact us if you need a professional and experienced dive team, we will respond quickly.

Kew Diving Services is rated 5 out of 5 based on 4 Google reviews.